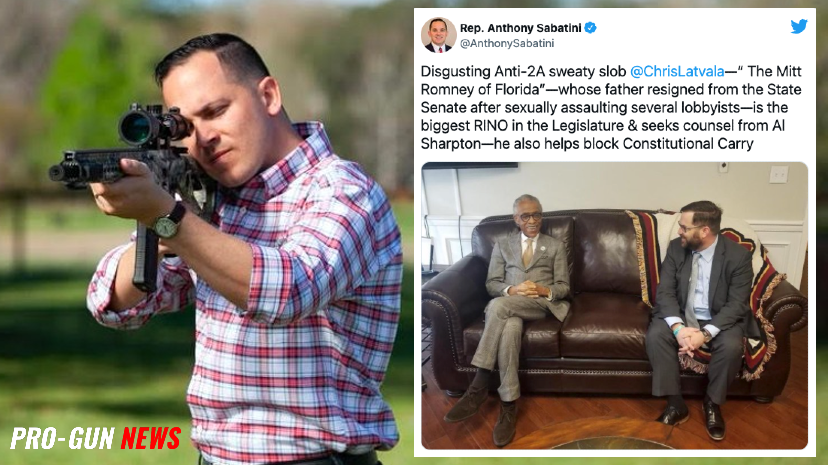 Florida State Rep. Anthony Sabatini is a near-extinct breed of politician who actually has a backbone, and who doesn’t take crap from those who don’t.

He proved that in a blistering exchange with high-ranking Florida Republicans, specifically zeroing in on State Rep. Chris Latvala, who he describes as a “disgusting Anti-2A sweaty slob,” who he accuses of blocking Constitutional Carry, along with several other accusations.

It all began when Sabatini went after anti-gun Florida House Speaker Chris Sprowls, who has been blocking Sabatini’s Constitutional Carry bill, HB 103.

Sabatini Tweeted: “RINO Cowards like [Chris Sprowls] are once again BLOCKING Constitutional Carry! When will people wake up & vote these TRASH establishment “republicans” out?!”

He concluded the Tweet with solid facts that any pro-gun American should take note of: “FYI—if your Representative and/or Senator is silent on Constitutional Carry, that means they are working AGAINST you!!!”

RINO Cowards like @ChrisSprowls are once again BLOCKING Constitutional Carry!

When will people wake up & vote these TRASH establishment “republicans” out?!

FYI—if your Representative and/or Senator is silent on Constitutional Carry, that means they are working AGAINST you!!! pic.twitter.com/a4YUJZn9gZ

Latvala jumped at the opportunity to simp for Speaker Sprowls, incorrectly insinuating that Sabatini doesn’t know the legislative procedure:

“Hey moron, who is your Senate sponsor? Surely you know how to pass a bill by now.”

Hey moron, who is your Senate sponsor? Surely you know how to pass a bill by now. https://t.co/B4GAZi8Jwh

According to gun rights group Florida Gun Rights, that is a false claim, posting that “no Senate bill is needed to pass Constitutional Carry” on their Facebook page.

That’s when Sabatini went for the jugular, calling Latvala a “disgusting Anti-2a slob,” along with giving him the nickname, “The Mitt Romney of Florida.” Sabatini went on to point out that Latvala’s father, Jack Latvala, was forced to resign from the Florida State Senate over sexual assault allegations, and pointing to his ties to race-baiter Al Sharpton.

Sabatini spoke exclusively to Pro-Gun News about the situation. He blasted the Florida Legislature as an “Anti-2A hub” which needs to be shaken up in order to ensure Second Amendment rights are protected.

“The Florida Legislature has become an Anti-2A hub, it’s time to primary these RINOs and get them the hell out of the party,” Sabatini said. “Chris Sprowls is the most anti-gun Republican to serve as Speaker of the House in the history of Florida. With the power of all branches of government in GOP control, this should be our moment to strengthen constitutional protections.”

“Unfortunately, people like Sprowls and his ilk are more concerned about appeasing anti-Gun lobbyists and the fanatical liberal media, which is as shameful as it is sad.”

Sabatini is a rare breed of politician who doesn't just talk the talk, but walks the walk, and fights like hell for vitally important issues like the Second Amendment. Not only is he taking the lead in the fight for Constitutional Carry, he is also running for Congress in Florida's 7th Congressional District. You can check out his campaign site at this link.

Constitutional Carry simply codifies the actual meaning of the Second Amendment into law. It removes the shackles of government control over your right to keep and bear arms and instead states that anybody who can legally own a gun is legally allowed to carry it, without requiring a government permission slip.

Pro-Gun News supports Constitutional Carry 100%, and will keep you up to date on its movement across the country. Sign up for our email newsletter by clicking here to be the first to get updated.